Check out my latest story Surfer Girls….
let me know if you are keen for chapter 2

“Is the surf always so big up here”, Paula questioned
“When its a north easter that break brings on some heat “, I explained.
“It is known for 5 to 6 foot waves throughout late summer, and as such is
one of the favourite hangs for the locals we were out there with today”. 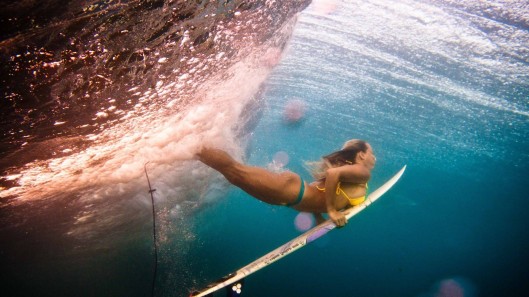 My mind drifted to seeing Paula’s head spring up to face me
as she kneeled through another wave earlier today
Her fresh face invigorated by the swell and the excitement of the big set approaching.
I remember turning back toward shore and seeing her gracefully pick up a wave
Angling and manouvering her board across its face
Her powerful legs pushing hard into her board
As she thrust up and down before flicking off behind me
I myself had paddled further out
Not sure of what lay in front of me
But exhilerated by the fact she was with me

“Were we to be friends after this weekend?”  I mused
“Or were we just to continue bumping into eachother at Uni?”

I smashed now into the avacado, before placing it upon the Cruskits
Lining the surface with cheese and some cucumber
‘Don’t get ahead of yourself Sasha,” I heard my mind whispering
“Just let things be. At least for the moment.”

Our two bedroom cabin sat on the edge of the forest.
The birds and night sounds lingering beyond us
As we sat slowly drinking the Savignon blanc
Laughing as our memories of lecturers gone by were discussed
Dane Jackson our torts lecturer being the most memorable

“He was such a puss,” remarked Paula
“It was as if he spent his life hiding behind lockers in the corridor”, she reflected
“Waiting to peek at or check out any hot young student he may or may not know.
Before glancing away as they caught his stare”.
“I know,” I siad.
“He didn’t actually do it for me”, I said quietly. Before bursting out laughing again.
“What”, said Paula.
“What are you laughing at?”, she exclaimed.
“Unlike you and Mr Phillips”, I said, bursting out laughing once more.
“Oh yeah”, replied Paula.
“I had such a crush on him. I spent most of last semester dreaming of those corduroy slacks.
“That brown was such a turn on,” she said with a sexy grin. “And that butt. Sooo hot.”

Mr Ron Phillips, our contracts lecturer of two years prior stood at 5ft ringing wet.
He possessed an unattractive five day growth and bifocal spectacles. He lowered them frequently to peer at you awkwardly. I was in stitches at her confessions of lust toward him.
Paula was funny. She was such a hoot. And I loved being around her.

Later that night my feet felt cold in bed
Reaching into my bedside table I put on some green socks
Before hearing Slipper, my cross kelpy whimpering on the veranda
Next thing I noticed two large goannas on the steps edge, eying off my best friend
“Here boy”, I said picking up his water bowl and bringing into his mat in the living room.
I fastened the door, only to see the goannas back track down the cabins steps back into the forest. They must have picked up Slippers scent and come searching for a late night snack.

Back in bed I removed my tshirt. All of a sudden I felt stuffy under the sheets. This summer the weather was changing at frequent intervals, difficult to predict in the least. Or maybe something else was weighing on me. Or in me as it were. Paula was at the other end of the cabin. And whilst I was unsure of the nature of our relationship, her friendship was one I was beginning to treasure. I fell asleep looking back into her face, as she came toward me through the blue and green waves of Callum Point, where the surf was crisp and clean. And the shoreline sand was a brilliant white, laying flat beneath the bluest of blue skies. She smiled again, as I could feel that twitch within me, slowly rising toward my suface.

A loud noise awoke me.
There was then a knock at my cabin door.

Paula whispered, “It’s me Sasha”.
“Come in I said,” before turning on my bedside lamp, and sitting upright to see what was happening.
“I heard some animals outside my window. They unnerved me somewhat” she said.
‘I’m sorry to have woken you,” she said, in an anxious tone.
“Its okay,” I replied.
“Here, come and sit”, I said softly.

As Paula approached I moved my legs to make room, only to notice there was a small
crease of moisture beneath my white panties. I must have been dreaming of more than just Paula’s face in the dead of night. I quickly pulled the sheet back up and prayed she had not visualised my moistened panties. Sitting up, without my tshirt or a bra on I still felt comfortable near Paula. We had sunbaked together today topless, and were familair with eachothers’ bodies. In the company of one another.
“Thanks Sashy”, she said.
“ I feel like such a worry wart.  It’s just Im not used to sleeping in a forest.”
“It’s fine”, I replied.

Before reflecting on how I loved it when she called me Sashy.
No one had ever called me that before.

“Just stay in here,” I said, and then pulled the sheet up over her, before turning over toward my side of the bed, to face the wall away from her. Trying to remain casual, relaxed and not fixated on the gorgeous creature laying beside me, I lay listening to the waves crashing further out from my window. “Get some sleep Paula,” I said warmly, “we have another big days surf tomorrow” .

And within seconds I was asleep again.

It must have been close to dawn. I could see the faintest light sneaking through from behind my curtains. I could feel the sheets above me moving. A gentle moaning sound was coming from the other side of my bed. I quickly remembered Paula had come in late last night.
I stayed facing my wall, to scared to roll over.  The moans became a litte louder.

“What was Paula doing?” My mind questioned. I lay in shock.
“Was Paula rubbing her pussy in my bed? Was she playing with herself as I slept?”
I could feel the sheets brushing from side to side over my shoulders. I then proceeded to arch my neck ever so slightly to see her knees wide open under the sheets, and her hand moving at pace beneath. Paulas writhing and thrusting up and down from upon the bed was pushing my sheets up and down, as she pleasured her love hole.

“Wow”, I thought to myself, as I turned back to face my wall again.
“What should I do?”

“What would happen if I pretended to stir and wake? How would Paula react?”

There was only one way to find out, I surmised. Whatever the outcome, I  couldnt lay still for another second. My own pussy needed rubbing. And I couldn’t help myself. I needed to finger my own juicy slit. And right about now nothing could stop me. I needed to fuck myself. Paula’s moaning, writhing and pulsating gyrations were turning my own body into a sea of lust. Taking a deep breath I decided to roll over.  My white sheets brushed over my now heightened nipples as I turned to face Paula.

“Did Paula know I felt for her? Had I blown my cover? Did she now suspect, I yearned to be her lover?